If you have a Loved Ones Stationed Overseas in the Military, You MUST READ !!!

As the holidays approach, the need for safe and timely shipping increases as we send gifts and cards to loved ones in the Armed Services. Due to the increase of shipping during these times, remember to follow the below tips to ensure that your packages arrive at your desired destinations in a safe and timely manner:

Make sure to call Goin’ Postal Tallahassee at (850) 692-3130, visit us on the web at http://gpoftallahassee.com, or drive to our store at 5810 North Monroe Street, Suite 210A, Tallahassee, Florida, and we can help you package your items safely and cheaply!!!

As we prepare to celebrate our nation’s 234th birthday, let’s remember all who have sacrificed to make this day mean something to us…and those who have made it possible for us to celebrate it any way we wish… Happy 4th of July!!!

How often we fail to realize our good fortune in living in a country where happiness is more than a lack of tragedy.  ~Paul Sweeney

My God!  How little do my countrymen know what precious blessings they are in possession of, and which no other people on earth enjoy!  ~Thomas Jefferson

It is easy to take liberty for granted, when you have never had it taken from you.  ~Author unknown, sometimes attributed to M. Grundler

This nation will remain the land of the free only so long as it is the home of the brave.  ~Elmer Davis

This message brought to you by the veteran who owns Goin’ Postal of Tallahassee at (850) 692-3130, visit us on the web at http://gpoftallahassee.com, or drive to our store at 5810 North Monroe Street, Suite 210A, Tallahassee, Florida, and we can help you package your items safely and cheaply!!!

When the Music Stopped… 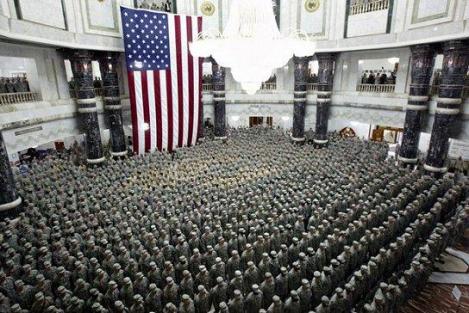 (For those who are unaware: At all military base theaters, The National Anthem is played before the movie begins.)
This is written from a Chaplain in Iraq :
I recently attended a showing of ‘Superman 3′ here at LSA Anaconda.  We have a large auditorium we use for movies, as well as memorial services and other large gatherings. As is the custom at all military bases, we stood at attention when the National Anthem began before the main feature. All was going well until three-quarters of the way through the National Anthem, the music stopped.  Now, what would happen if this occurred with 1,000 18 to 22 year-olds back in the States?  I imagine there would be hoots, catcalls, laughter, a few rude comments, and everyone would sit down and yell for the movie to begin.  Of course, that is, if they had stood for the National Anthem in the first place.  Here in Iraq, 1,000 Soldiers continued to stand at attention, eyes fixed forward.  The music started again and the Soldiers continued to quietly stand at attention.  But again, at the same point, the music stopped.  What would you expect 1,000 soldiers standing at attention to do??  Frankly, I expected some laughter, and everyone would eventually sit down and wait for the movie to start.  But No!!… You could have heard a pin drop, while every Soldier continued to stand at attention.  Suddenly, there was a lone voice from the front of the auditorium, then a dozen voices, and soon the room was filled with the voices of a thousand soldiers, finishing where the recording left off: “And the rockets’ red glare, the bombs bursting in air, gave proof through the night that our flag was still there. Oh, say does that Star Spangled Banner yet wave, o’er the land of the free, and the home of the brave.”  It was the most inspiring moment I have had in Iraq and I wanted you to know what kind of Soldiers are serving you.

Remember them as they fight for us!  Pass this along as a reminder to others to be ever in prayer for all our soldiers serving us here at home and abroad. Many have already paid the ultimate price.

Written by Chaplain Jim Higgins. LSA Anaconda is at the Balad Airport in Iraq, north of Baghdad.

This message brought to you by the proud veteran who owns Goin’ Postal of Tallahassee. You can reach us at (850) 692-3130, visit us on the web at http://gpoftallahassee.com, or drive to our store at 5810 North Monroe Street, Suite 210A, Tallahassee, Florida, and we can help you package your items safely and cheaply!!!

Shipping Support to our Troops…

It may seem hard to believe, but we are rapidly approaching the TENTH anniversary of Operation Enduring Freedom in Afghanistan and Iraq.  It is now more important than ever to offer whatever support we can to our friends, relatives, and loved ones who are making the sacrifice to protect our country’s interests abroad—and what better way to remind them that their efforts are appreciated than to send them a care package?  Items such as candies, snacks, magazines can help make their time over there at least a little more comfortable; as can hygiene items like mouthwash, cleaning wipes, and lotion.  And the USPS offers flat-rate shipping to APO/FPO destinations for really low rates!

To ensure that cards and packages reach your loved one or friend as quickly as possible, please be sure to:

Each country has its own specific restrictions and regulations on items in incoming mail and packages, and each 5-digit military post adheres to these restrictions and may also have additional rules of its own.  To find out if you can send what you want to, just call Goin’ Postal Tallahassee at (850)668-1840 or look up restrictions to APO/FPO addresses online at http://www.usps.com/cpim/ftp/bulletin/2003/html/pb22101/apofpo.html

In general, the following items may NOT be mailed to APO/FPO addresses:

Special Note: Some Muslim countries may have laws against displaying Christian symbols. Please keep that in mind when sending cards, packages, and letters.  You’ll want to use envelopes and boxes that don’t bear Christmas decorations on them since customs may refuse to allow them to enter those countries.

This information has been provided by Goin’ Postal Tallahassee as a public service.

Goin’ Postal Tallahassee offers a variety of services from stamps sold at face value to mailing and shipping via the United States Postal Service, FedEx, DHL, UPS, freight and other carriers, as well as packing and shipping supplies, eBay services, copying, faxing, notary services, low-cost mailbox rentals, and much more. Visit us at 3491 Thomasville Road in Tallahassee, call us at (850)668-1840, or visit us on the web at www.goinpostaltallahassee.com